Earlier this week a Twitter video went viral after it was reported that two black men in a Philadelphia’s Starbucks had been arrested after an employee called the police on the two men for reportedly not ordering anything. According to reports, the two men were waiting on a friend to show up who unfortunately arrived as the two men were being being arrested. Within hours Black Twitter erupted calling for a boycott of Starbucks using the hashtag #BoycottStarbucks while others are asking African Americans (who have an estimated buying power of over 1.4 trillion dollars)to spend money they would typically spend at Starbucks on black owned cafes.

While many feel this boycott of Starbucks will have little to no impact on the giant cafe there is reason for to fear how this could impact the brand financially. It has been reported that H&M(the world’s second-largest clothing retailer has piles of unsold clothes worth more than $4 billion after Black Twitter launched a protest against the brand after it’s infamous ‘Coolest Monkey in The Jungle” but does Starbucks really care about black consumers? The answer points to no as seen in their apathetic apology below. 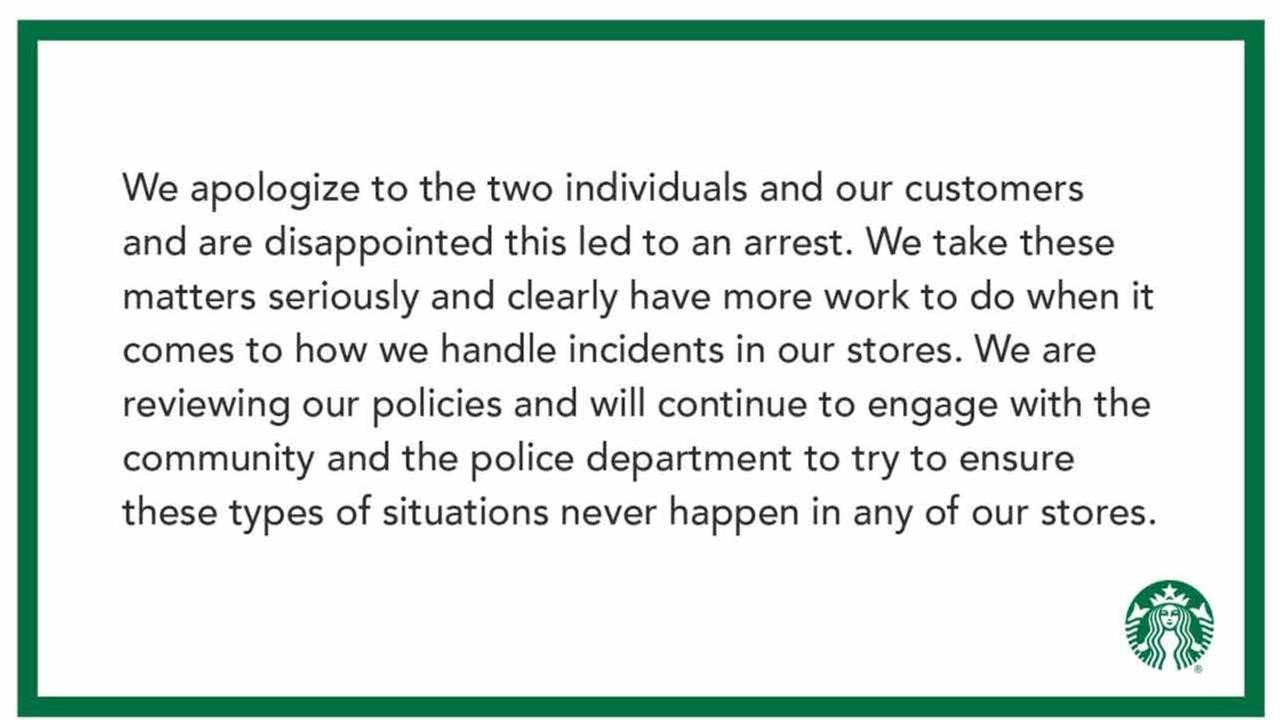 While many Starbucks loyalists continue to sit on opposite sides of this debate many African American consumers have began question what Starbucks will do to the employees who called the police on the two gentlemen. Another question is what will be done to improve race relations within the company to insure these incidents will never happen again? If we’re reviewing the track record of Starbucks the answer is nothing.

Several years ago it was reported that, Starbucks was sued by a former network engineer for allowing racist comments and harassment in the workplace. Although the network engineer filed complaints with HR, nothing came of it. He sued, and the company settled for $120,000 and we never heard the story again.

While many were grateful that Starbucks Coffee finally decided to make a statement the question has now become what will they do to SPECIFICALLY engage the black community. Engaging the police and community sounds great but what programs are being put in place, what organizations are you teaming up with and most importantly what are you doing to ensure black consumers don’t have to be afraid to come into your stores when getting a cup of coffee?

Only time will tell but that’s exactly why Black Girl Group was created. To connect African American women freelance creatives to companies companies who want to market, advertise and reach black consumers. Perhaps by engaging a black publicist or crisis communication manager Starbucks could’ve avoided the backlash their apology letter continues to receive.

What are your thoughts? Do you think Starbucks made a huge misstep? Leave your comments below.

How To Support Black Owned Businesses

How Do You Find Diverse Hires

How To Find The Best Recruiters For Marketing Jobs

Here are some steps to find the best recruiters for marketing jobs: Research: Look up online directories, such as LinkedIn or Glassdoor, to find...